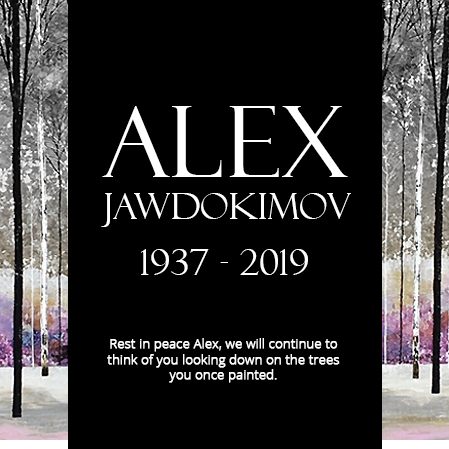 It is with a heavy heart and tears in our eyes that we say goodnight to Alex Jawdokimov, who has sadly passed away.  Alex was a true gentleman and his passion for art shone through every single painting he created. His legacy will remain in our memories for years and decades. Rest in peace Alex, we will continue to think of you looking down on the trees you once painted.
Alex Jawdokimov was born in Smolensk and has had a remarkable life that could be the script of a beautiful feature film. He was abandoned at a farm but spent a large part of his youth in various concentration camps throughout Europe. In 1950 he came to England, his mother had fled there during the Second World War.
After having lived in England for 5 years he became a citizen. In the 60’s he lived for a short period in Canada and learned to fly in the RAF. Meanwhile, he studied at Somerset College of Art. He also started performing in plays and musicals. Despite his love for acting, he continued to paint and spent the weekends in Hyde Park with other artists. Alex developed his own style, using an acrylic base texture, adding light using gold or silver leaf, he captured the luminescent quality of trees in the sunlight
May you rest in peace.